CEO speaks as Davies Group revs up for overseas expansion 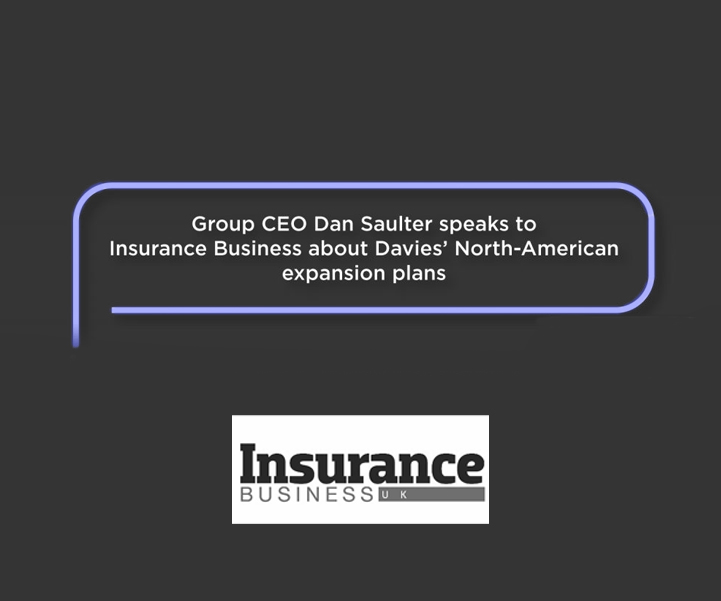 This article was written by Paul Lucas and first published in Insurance Business.

The American dream is defined as “the ideal by which equality of opportunity is available… allowing the highest aspirations and goals to be achieved.” Now one UK-based firm is looking to earn its stripes and reach for those US stars – but not by launching with “equality of opportunity” but instead by offering what it believes is a series of distinct market advantages to potential insurer partners.

That firm is Davies Group, a claims solution company which describes itself as “reimagining operations and digital solutions.” In mid-September, the firm expanded further into the US with a swoop for Ohio-based Frontier Adjusters establishing the independent adjusting arm of the company alongside its existing US businesses which include its captive management offering Quest, as well as its insurance audit and inspection businesses.

“We’re already in the US and Canada but haven’t been doing claims solutions,” group CEO Dan Saulter (pictured) told Insurance Business. “We identified a really big opportunity to move our business into the broader North America area and are excited about that because of the way the Lloyd’s and specialty market cover those territories – there are a lot of familiar faces in both the UK and Ireland market and in North America.”

Back in January the firm received a significant investment from a new Canadian shareholder AIMco, an Alberta-based pension fund. At that point it started to talk about pushing the business out into the US in the claims solutions area and believes it now has the financial power to make that happen.

“We’ve been building a pipeline of acquisition opportunities,” Saulter explained, “this is not a solely organic play for us. We are unashamedly going to be talking to owner-managed or owner-driven businesses in the claims solution area that have succession questions to answer. The first deal we did was the deal for Frontier – now we want to add new capabilities around Frontier and the most obvious thing is to add a broader set of desk claim solutions capabilities in the TPA space. If you watch this space, we expect to be announcing more stuff in the next three- to six months.”

Davies believes it stands out from the pack with Saulter pointing out that it has been a frontrunner with a host of innovations – and, as such, has established itself as a trusted brand.

“We believe we were ahead of the curve in investing in things like smartphone apps for processing and adjusting claims,” he said. “We have a technology called Davies Connect where we make use of the iPhone Wallet to keep customers updated on their claims progress, for example. Surprisingly in the insurance market that hasn’t been done much yet. Three-four years ago we were also one of the first businesses to make proper volume use of unmanned drones to help us process flood and commercial claims. So, this is all about finding ways of doing certain types of claims and perils in new ways that shorten the process and contain costs for insurers. We offer a number of solutions in the claims journey rather than one.

“In the US, we see a number of dynamics [that make our proposition stand out]. There are a host of large players with what we think are unsustainably low margins. The challenge for us is to bring all the things we think make Davies special in the UK and Ireland and marrying them in a clever way in the US so we have something new to offer that market and present something they don’t already have – that’s to be more joined up, higher tech invested and have more automation where needed.”

Its main advantage, according to Saulter, comes from within the firm. It has a department called Davies Disruptive Thinking where staff members can pinpoint new ideas – many of which make it to the frontline, including one suggestion that proposed the creation of virtual reality headsets to allow claims handlers to get a feel of what it’s like to be a policyholder – something the firm is now selling to its clients.

“Davies is trying to be deep in terms of capability but also broad for our insurance customers,” Saulter said. “We passionately want to sell everything we do to all of our customers because we believe what we offer is fantastic. We want to be front of mind, so someone thinks ‘I’ve got something to do in my insurance business, it’s technical, it involves consulting, it involves claims, it involves underwriting – I’m going to contact Davies.’”

Despite having its momentum set towards a US expansion, Davies has not taken its eye off the ball in the UK, recently announcing the acquisition of learning business FWD which provides solutions to help young people and professionals get insurance qualifications. It hopes to position itself as a relevant player in the learning solutions market.

“If you’re not going forwards, and if you’re standing still, then you’re going backwards,” said Saulter. “This is not a static market. Everyone is looking at how they can disrupt, invest and reimagine. Frankly, if the existing players aren’t doing that, someone else will do that.

“So, the question is how do we keep our focus on the core product? That is our day job. We want to be in offices, day in and day out talking about what we’re doing, making sure if they have feedback, we action it. We have to retain our customers by doing a great job for them.”

When Saulter arrived at the firm six years ago it had around 250 staff – today that number stands closer to 2,000 globally through organic and M&A growth. The firm has also expanded its ownership structure so rather than a “very small section of the management team” profiting, it instead has more than 1,000 people who are stock owners or who drive the value creation in Davies making it much easier to meet staff and “talk about how we’re going to grow our business and serve our clients because they can see what they are doing has a direct impact on their lives and their careers.”

Going forward, Saulter admits that its current business make-up – which is around 80% pounds and 20% dollars and euros – will change with the dollar share growing. In the US, he describes their market share as “zero” but says there is an opportunity to grow and grow quickly.

“The number one factor is the cultural fit of the target,” he said about potential acquisitions. “We’re focused on businesses that will fit within Davies where the management team wants to stay and help us build. We want to keep that entrepreneurial spirit – that’s what has got us to where we are today.”